Get to know Santorini island

The panoramic volcanic island is a member of the Cycladic Island in the southeastern part of Greece, 200km away from the mainland. It is the largest island in a small region known as Archipelago, found at the south of the Aegean Sea. With Phira as its capital (it is also referred to as Thira), Santorini is a volcanic remain after a volcanic eruption dated back 3500 years ago. It is also among the most vibrant islands in Greece.

Explore more with our one and two day trip from Crete to Santorini island. 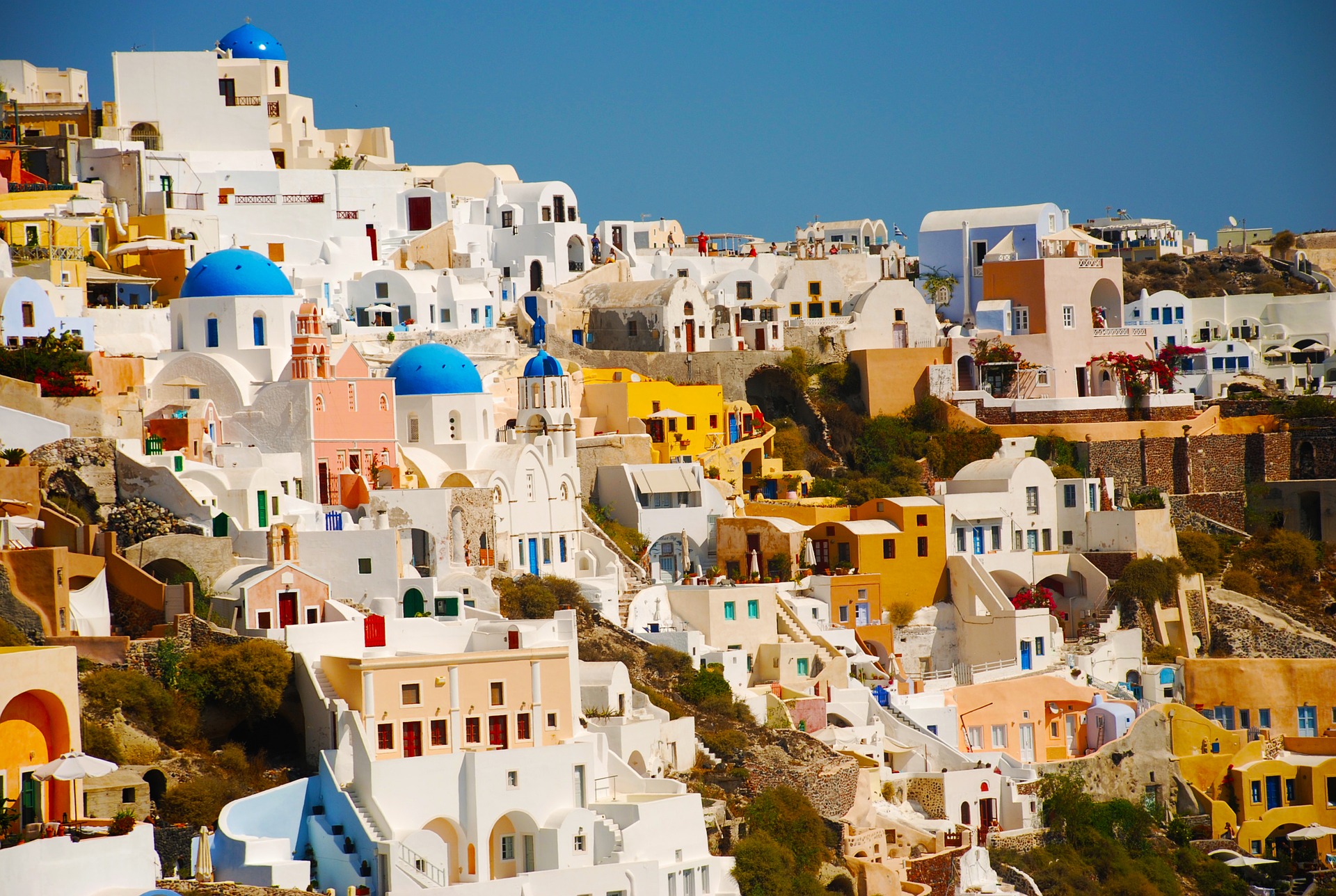 Take hikes on the caldera to OIA, which is constructed on the high end of the caldera rim, and is also well known for the best sunsets. Traditional lavish mansions are evidence of the rich people who inhabited OIA a long time ago.

At the south side of the caldera is the Phira harbor which also serves as Santorini’s capital. It is easy going down but difficult going up because of how steep it is. If you can’t go back up on your own, locals offer transport services which are basically donkey rides. If you are a fun of nightlife, never miss a night of Phira because the night ‘never sleeps’. You will have all the fun you want from discos to tavernas, bars, and restaurants.

You can get a better view of the Caldera from the center, where there is a small island known as Mea Kameni.

The ruins were named after a fictitious ruler who was known as Theras and was first inhabited in the 9th century by the Dorians. At the bottom of the mountain where they are located, is Kamari, where you can access the ruins from. Optionally, there are trek trails on both sides of the mountain that you can use to get to the ruins.

For an amazing sea bathing experience, Kamari and Perissa which are black sand beaches are always at disposal. The Mesa Vuono rock and the flamboyant blue sea in Perissa provides a near to perfect scenery. Nightlife here never comes to a halt and you can access the Ruins of Ancient Thera from here. If you wish, you can rent hotel rooms at either the two places, and there is an outdoor cinema in Kamari.

Apart from admiring these wonderful beaches, you can also experience what it feels like to swim in them. Alternatively, you can visit Palia Kameni and enjoy the thermal waters of the Aegean Sea or you can also go scuba diving here or at Adiavatis reef and at the caves found in Mega Pigadia.

A Minoan age community, Akrotiri harbors ruins that go by the same name and an old fortress that was destroyed in the 1956 earthquake. With little to see, you can enjoy boat rides to the white and red beaches as well as Palea Kameni, an old volcano. You can also savor great foods at tavernas that are built inside rocks.

The Santorini hot springs formed in 1570 after a sequence of volcanic eruptions. The hot springs are said to provide therapeutic benefits as they are rich in magnesium and iron, and they have 127 meters as the highest sea level. The hot springs are found in four different locations; one in Emporio known as Anavrytos, another in Megalochori known as Thermi, and the third and fourth in Kokkina Nera and Plaka.

The term Vigli means viewpoint. The destroyed old houses in Imerovigli village testify the destruction that took place during the 1956 earthquake. It provides a striking view of the highland with balconies giving the view of the volcano and sunsets. There are traditional houses where you can rent rooms for accommodation.

The Monastery of Profitis Ilias

Built in 1711, it is made up of the St. Nectarios chapel and the monastery building. There is also a vineyard and the few monks who live up there produce wine from it which is presented to visitors. No outsider is allowed in the monastery building and in there are countless church books and other items from ago. The view here is amazing and the closest town is Pyrgos.

It used to be the capital of Santorini until the beginning of the 1800’s. The village is situated on the southeastern side of Phira at the top of a hill providing a fantastic view. Downhill, there are shops and really good taverns where you can get supplies. In the middle is the Venetian castle that is surrounded by traditional houses.

While here, you can also take a boat and visit neighboring beaches and nearby islands.

Familiarise Yourself With Santorini’s Gastronomy

Farming is one of the activities in Santorini and offers you an opportunity to taste some of their best farm products. Santorini also has a variety of unique products that are the pride of the island, grown and produced locally. Make your tour more interesting, experience these different kinds of foods but make sure that you are cautious and the highest level of hygiene is maintained.

• Wine: Santorini is the place of origin of the white grapes known as Assyrtiko as well as two other varieties, Aidani and Mandilaria with Visanto as the name of wine produced here. You can visit the vineyard in Thira to learn more about the vineyards and both traditional and modern methods of wine production.
• Split-Peas: As expensive as they are, the Santorini split-peas are very famous all over Greece because of the many advantages. First, they cook really quickly, can be used to make other dishes and go really well with sauce. Not to forget they are scrumptious.
• Cherry tomatoes: According to the previous inhabitants, their seeds were brought to Santorini from the Suez Canal first by the Greek sailors who thought that they were sweet. If you happen to be in Illiotropio, you can taste the cherry tomato balls which are made out of the tomato but are not the actual tomatoes.
• Chlorotyri: This is slightly a sour type of cheese produced only in Santorini in very small amounts. It is made from goat and can be used on salads and bread.
• White aubergine: This is a unique type of aubergine as it is not the usual purple-colored aubergine. Its taste is sweet, it is less seeded and can be used in salads or can be fried.

The best time to visit

The best time to visit is during the months of April, May, October, the beginning of June and as September exists. July and August are the worst months to visit as all prices are hiked and the chances of getting the best hotel rooms with the best views are limited because the place is crowded with other tourists.

To get to Santorini coming from Crete, you can choose to enjoy the breeze and view of the sea by cruising on the available ferries or sea jets and on the other hand, you can take a flight via small aircraft services offered. It is good to have a car pick you up from wherever you are staying to where you will departure from for convenience purposes.

• Sea jets that operate from April to October from Rethymnon in Crete to Santorini.They are fast and can be convenient if you touring for a day, as they operate from 7.45am to 10.10am.
• 5hour Lane Lines ferries from Agios Nikolaos in Crete to Santorini.
• Lane Lines ferries from Sitia to Santorini. If not in a hurry and don’t mind spending half your day on the sea, the Sitia traditional ferries take around 8 hours to get to Santorini.
• From Heraklion, unlike the other three places you can departure from, you have more than one means to choose from;
• There are fast ferries -Sea jets and Hellenic seaways- which take up to two hours to get to Santorini, and traditional ferries –the GA ferries- which take up to four and half hours.
• The Highspeed7 is the most luxurious and fastest boat you can take to get to Santorini from Heraklion. You can opt for a one day tour or a two-day tour, it all depends on your budget or preference. It takes a maximum of an hour and a half to get to your destination. For the two-day tour, it cruises from Heraklion to Santorini then back to Heraklion the following day.
• Optionally, if you want to get there early to make the most of your day, you can board the Minoa aircraft which are really fast and will get you to Santorini in half an hour.
BOOK TWO DAYS TRIP TO SANTORINI ISLAND

It is vital to note that most of the Greece ferry companies delay online information about tickets and that all aircraft operate five times a week mostly during summer.

Clearly, activities in Santorini never run dry. During your Crete visit, dare to go there and you will not be disappointed. Explore as many places as you can, visit the black sand beaches, enjoy cruises in the sea, enjoy beautiful views of the island as well as the sunsets from different places. It is all about the fun and making every minute count.

Rent a car in Crete